It was not just the sun shining on the opening day of the Stena Line Dublin Horse Show at the RDS. Dressage Ireland brought together some of our up and coming Irish talent, who all shone in the big Simmonscourt arena. The dressage to music display featuring young Irish riders and one mother-daughter combination drew in a huge crowd with the grandstand full and elbow room only around the arena edge. John Kyle compèred with special guests Dane Rawlins and Heike Holstein providing insights from the competitor and youth development perspective. Dane established the British Young Rider Dressage Scheme (BYRDS, now British Dressage Youth) and Heike came up through the Silver Spurs youth development programme here in Ireland. Both are now representing Ireland in international competition – a goal many of today’s young riders aspire to.

After an arena walk and introduction from the speakers, the display kicked off with two mini trailblazers.

The Trailblazers initiative was introduced to give all young riders an opportunity to compete in dressage against their peers in a friendly and supportive environment. Membership is at a reduced rate, no points are accumulated, and classes are split by age and level, ranging from Under 8s walk & trot tests up to under 21s Novice level. Trailblazers can qualify for the Trailblazer Championships held alongside the Dressage Ireland National Championships, giving young riders experience at a high-level competition and venue as well as a great opportunity to socialise with other young riders from all around the country. Feedback from young riders and parents has been fantastic, citing that it helps prepare young riders for all disciplines, not just dressage, and is now considered a key part of the development pathway for future high-performance dressage riders. The Trailblazer initiative has in fact been so successful that parents have been asking for a similar competition for themselves! So, this year Dressage Ireland has introduced a Sportsman class where adult amateurs can compete against other adult amateurs in Preliminary and Novice classes. There has also been training organised specifically for Trailblazers and Sportsman members. The aim is for everyone to be able to access dressage training and take part in dressage competitions, whatever their age, level, horsepower or ambitions may be.

Anna O’Connor and Kate Murphy, both 9 years of age, opened the display with a walk and trot test performed in single file to The Bare Necessities (Jungle Book) finishing with perfect square halts side by side. They and their lovely chestnut ponies, Trefriw Pepsi and Sahara Gold, seemed not at all fazed by the big atmosphere and impressively completed the performance from memory, no test readers required.

Next in were Junior Trailblazers, both 11 years of age, Ciara O’Connor on Brandon Zimbabwe and Rebecca McGrath on Bilko. Ciara and Rebecca both take part in other disciplines, such as showing, show jumping and eventing, and pony Bilko also has a second career working in the family riding school and with autistic children. Ciara and Rebecca performed a great, mistake-free, mirror image test where both riders had to ensure they stayed in sync with the other.

16-year-old Senior Trailblazer Katie Behan with her 13hh Connemara x Welsh pony Jet put in a solid solo performance, showing that the natives really can strut their stuff. When interviewed, Katie wisely said that “every horse and rider should be able to do dressage even if they don't compete as it improves how the horse performs and can help in jumping as well.”

Ciara Hanley, a Senior Trailblazer of 18 years of age, then did a stellar job riding Captain Caruso, a 13-year-old Irish Sport Horse stallion, who seemed a little excited by the occasion. Perhaps he saw the jumps outside the dressage markers and thought they were on the cards, having competed successfully at 1.50m internationally. Ciara calmly settled the horse and sensibly rode some lovely walk and trot work for the audience.

Next in was 14-year-old Darragh O’Hara, Junior Trailblazer and Para Equestrian rider. Para riders are assessed on their ability and are allocated to a grade group with others of similar ability. Darragh is Grade III and is allowed to use his voice, 2 whips and looped reins amongst other dispensations. Darragh rode a beautiful test on Glenoaks Jazz, a 6-year-old Connemara pony. Although not part of the test, Heike asked Darragh to demonstrate Medium trot for the crowd and sure enough the Irish pony strutted across 2 long diagonals, proving that Ireland has some fantastic horsepower for dressage as well as other disciplines. Heike herself rides an Irish Sport Horse at Grand Prix on the Irish Dressage Team.

Rachel Carr, who at just 13 years of age is already familiar with big international arenas, stormed into the arena on 13-year-old pony Calelvador May Blossom, performing an FEI Pony Freestyle to Music test. Heike commented on how Freestyle tests give you an opportunity to pick movements that suit your horse, which Rachel had done very well, performing some excellent half passes, medium paces and counter canter.

Last into the arena were mother and daughter duo, Sonya McCormack and Laragh Byrne, who performed a wonderful Pas de Deux to the sound of I Wanna Be Like You from the Jungle Book. Sonya rode her homebred Irish Sport Horse, Bounce Back George, while Laragh at just 10 years of age rode her relatively new 5-year-old German riding pony, Dali Gold. The contrast of little and large working in harmony and performing a beautifully choreographed test was a treat to see.

The riders, horses and ponies today were fantastic. They are a credit to Dressage Ireland and surely have bright futures ahead of them. Their varying ages, levels, breeding and disciplines they take part in just shows that dressage really is for every rider and every horse and pony.

A huge thanks goes out to the riders and the teams of people behind them that took part in today’s display. Thanks also go to John Kyle, Dane Rawlins, Heike Holstein and all the organisers behind the scenes both from the RDS and Dressage Ireland.

Whether you are a young rider looking to take part or someone looking to volunteer to support these fantastic programmes, you can find more information on the Dressage Ireland website here: 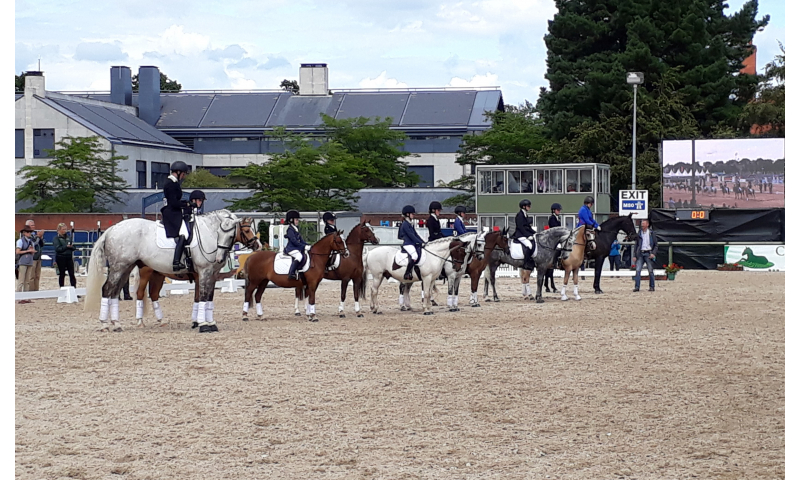